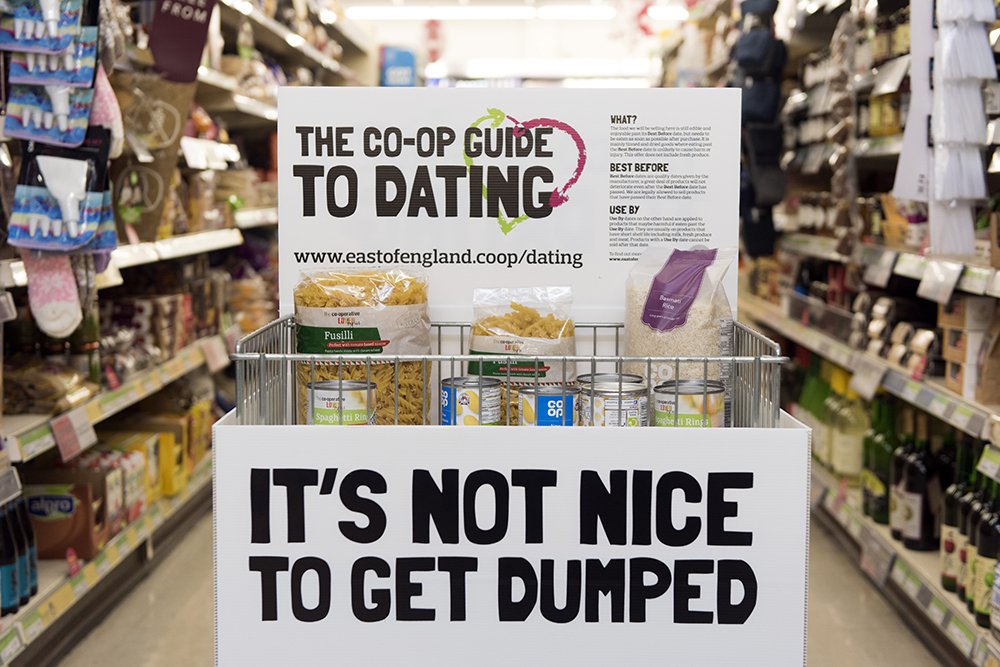 The East of England Co-op has become the first major retailer to start selling products beyond their ‘Best Before’ date with the aim of significantly reducing food waste in its stores.

The biggest independent retailer in East Anglia will now sell products over their Best Before date in its 125 food stores for a nominal 10p. The move follows a successful three month trial in 14 of the Co-op’s stores and will be launched with new campaign, “The Co-op Guide to Dating”.

It is estimated that every year between 30 – 50% of food produced globally for human consumption is wasted. The East of England Co-op anticipates the initiative has the potential to save at least two metric tonnes from being wasted every year.

Shoppers will be told ‘Don’t be a binner, have it for dinner!’ and ‘It’s not nice to get dumped’ in an effort to encourage participation.

Roger Grosvenor, Joint Chief Executive at the East of England Co-op heads up the company’s retail division and has spear-headed the initiative. He commented: “We are committed to reducing waste in our business and The Co-op Guide to Dating is one of many initiatives we have instigated to make the East of England Co-op as efficient as possible, reducing our impact on the environment.”

“During our trial we found our 10p items went within hours of being reduced, sometimes quicker,” said Roger. “The vast majority of our customers understand they are fine to eat and appreciate the opportunity to make a significant saving on some of their favourite products.

“This is not a money making exercise, but a sensible move to reduce food waste and keep edible food in the food chain. By selling perfectly edible food we can save 50,000 plus items every year which would otherwise have gone to waste.”

The majority of products that use Best Before dates will be included, such as tinned goods, packets and dried food. The 10p reduced products will not include ‘Use By’ dated products, which should not be consumed after the Use By date has passed.

Sales data is now more closely reviewed to monitor waste levels in each store, to enable the Co-op to remove or reduce product lines which generate excessive waste.

The East of England Co-op has now also instigated a new Reduced to Clear policy, offering more significant discounts earlier in the day on products nearing their Use By dates to further help reduce waste.

These changes are the latest in a string of environmental initiatives implemented by the East of England Co-op. Customer recycling points and recycling facilities for stores help manage packaging waste, and partnerships between local suppliers in the East of England Co-op’s award-winning Sourced Locally range helps local produce travel even shorter distances, reducing the Co-op’s carbon footprint.

The 10p discounted food is not able to be donated to charities such as food banks, as they currently do not accept food after its Best Before date has passed. Instead, the East of England Co-op collects donations of non-perishable food and toiletries within date in all its stores. Thanks to the generosity of Co-op customers, donations for more than 80,000 meals were collected last year and donated to 22 food banks across the East Anglia.

For more information on the East of England Co-op, visit www.eastofengland.coop.