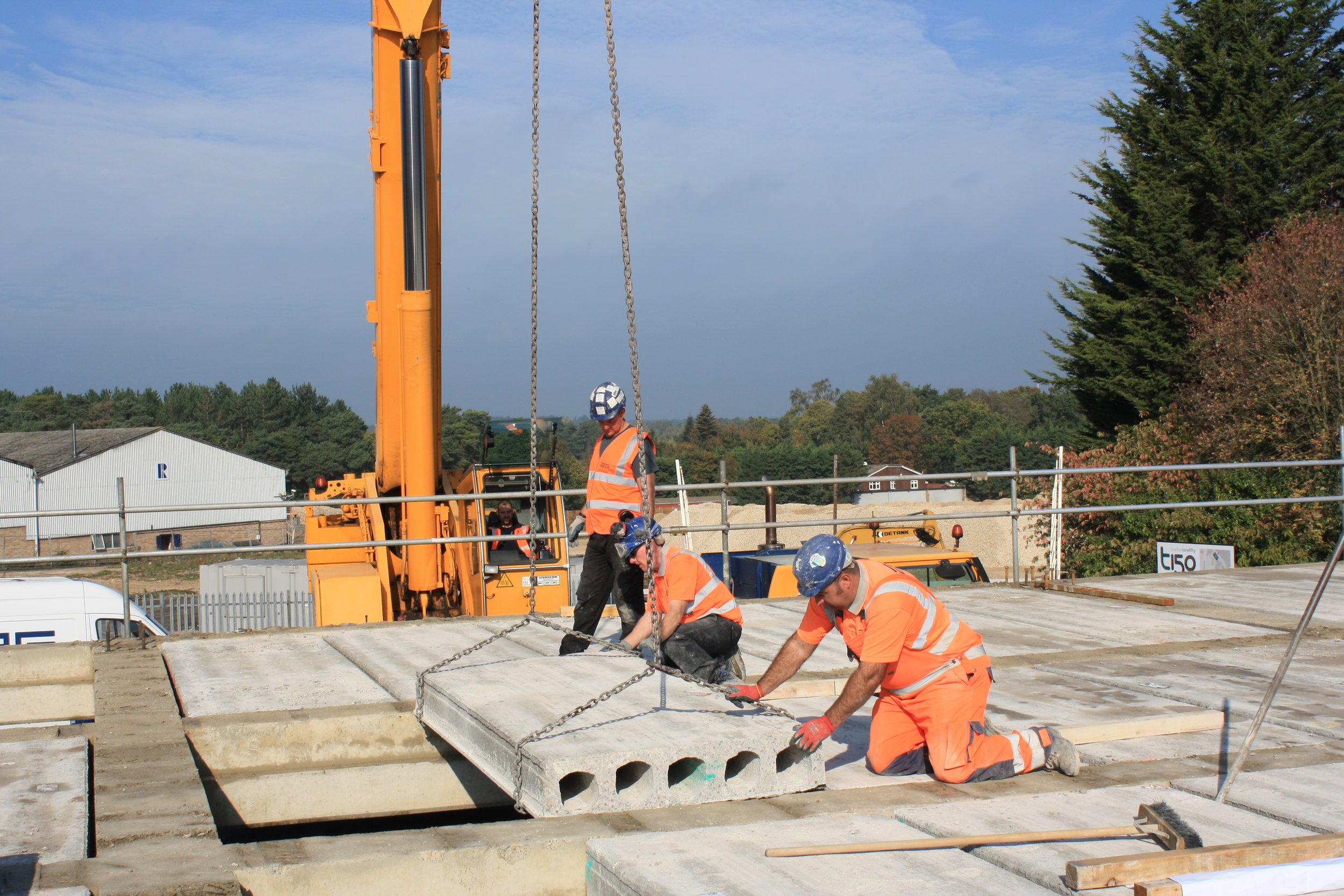 A pivotal stage in the construction of a new storage and distribution building for TROX UK in Thetford has been completed, with 184 floor slabs lifted into position using a mobile crane.

With a weight of up to 2.5 tonnes, each slab has been carefully placed to form the roof of the undercroft car park and the floor of the new 1,860sq.m. warehouse.

“Precision site measuring has been called for at this stage, as when installed each slab has no more than a 10mm gap around it, with each section taking six slabs sitting side by side,” commented Darren Webb, MD of Mixbrow Construction who is carrying out the building work.

When Mixbrow was initially called in by TROX UK last year, to discuss its plans for extending its site based on Caxton Way,  they were asked to meet three criteria: Maximise the space available on site to create additional car parking; create a new building that fitted well with the facilities and enabled the transfer of materials without being affected by the wind and rain. And, finally, the design had to be future-proofed to facilitate further expansion of the site as part of TROX UK’s long-term business plan.

The project has been a real local effort with Attleborough-based BHA carrying out the civils design and Suffolk-based Gill Associates being retained as the employer’s agent.

However, the first step for Mixbrow was to appoint Bury St Edmunds based Rees Pryer and Ipswich-based Superstructures to carry out the architectural and structural engineering design.

Darren continued: “We knew the design would be more complex than your usual building project due to having an undercroft car park as an alternative option to the original plan. This would create 44 bays under the new warehouse; freeing up space that had been provisionally allocated elsewhere on the site.

“However, when constructing the undercroft car park, we realised that installing temporary shuttering and scaffolding in the usual way wasn’t workable, so we decided to use planks, columns and piles, and called in Superstructures to design the ceiling of the car park, which also doubles up as the floor of the new building.”

Craig Carr from Superstructures explained: “We were able to use our 3D software Tekla to design and produce different options for consideration. It also helped and made it a lot easier when deciding on the best structural design option, that the steel fabricator, King’s Lynn-based Nimmo Industrial Buildings, also uses the software.”

Chris Wilkie from Rees Pryer Architects added: “Our challenge as an architect was to get as much use out of the space as possible and work with the sloping gradient of the site. We also knew that the undercroft car park would need aeration, so we tried to design this in a way that used natural ventilation. The solution was to use perforated cladding which TROX UK was able to fabricate itself as it manufactures and sells air conditioning and ventilation systems and components.

“Each car park space is 2.4m by 4.8m and needs to fit a 4-wheel drive car with its boot open. The whole scheme of columns, floorspace and ceiling height had to be based around this, whilst fitting with the natural slope of the site.”

Now the slabs are installed, 1,100 cubic metres of concrete supplied by Hanson at Mildenhall will be poured.  At the same time the cladding will be fitted, and the steel frame will be erected, whilst groundworks are carried out to level the site.

When completed early in February 2019, there will also be a canopy that links the new facility to the existing accommodation.

Read More
PrevPreviousBusinessman who holds back the waves, aims to create them – for charity
NextNetXtra and Thomas Ridley partnership celebrate gold awardNext