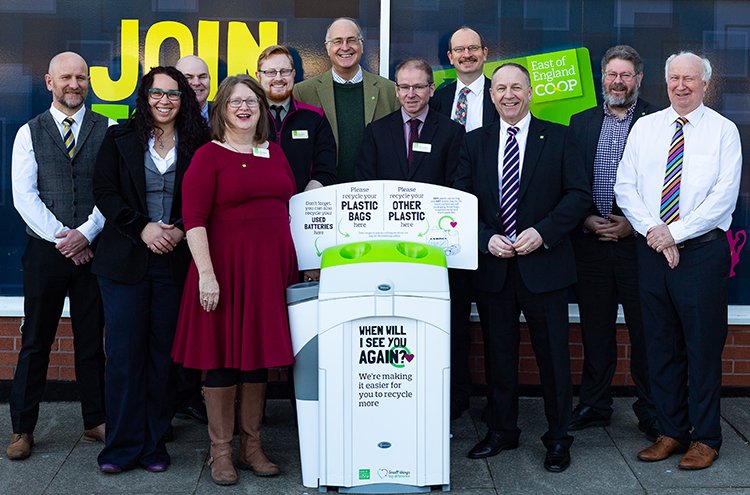 The East of England Co-op has announced a new partnership with Ipswich Borough Council which aims to improve understanding of and boost recycling rates in Ipswich.

The independent retailer will run an in-store trial to increase awareness of items that can and can’t be recycled, and will introduce recycling points for plastic packaging, carrier bags and batteries – items which can’t currently be recycled at home – in its 20 stores across Ipswich.

The idea for the partnership emerged when the co-op began planning how it could follow up on its award-winning ‘Co-op Guide to Dating’ initiative, where it became the first retailer to start selling products that were past their best before date, in a bid to reduce food waste.

“The reaction to our Co-op Guide to Dating campaign inspired us to look at other ways we can help our customers to reduce waste. Whilst doing our research we became bamboozled by the complexities and misunderstanding around recycling, and set out to do what we could to provide some clarity.”

“Our Guide to Dating has cut the amount of food we waste by 33% – that’s around 350 tonnes in just over a year. But we wanted to do more, which is why we’re introducing this pilot scheme to help our customers and members to recycle more.”

“Reducing the amount of waste we generate is everyone’s responsibility, and it’s fantastic that the East of England Co-op are prepared to play such an active role. Helping people understand what and how they can recycle is complicated, and this partnership will be very helpful in addressing those challenges in Ipswich. Their initiative to cut food waste is an example to other stores. The less food we waste, the more we have to spend on other items and everyone gains.”

The partnership launched on 14th January 2019 and the trial will run until the middle of May 2019, before being rolled out across the whole Society.

For the trial period, the recycling bins will be located at four larger East of England Co-op food stores in central Ipswich (Broke Hall, Henley Rise, Chantry and Ravenswood) and are free to use for all customers.

Customers can recycle plastic packaging, batteries and carrier bags at the remaining stores in central Ipswich by handing these items over at the checkout.

The recycling awareness campaign is based on the same distinctive design as the ‘Co-op Guide to Dating’ and uses humorous, simple and clear language to communicate which items can and cannot be recycled through point of sale materials in-store.

The campaign focuses on addressing the six biggest contributors to recycling contamination in Ipswich. These are:

2.       Glass which must be recycled separately

4.       Aluminium foil which must be clean and rolled into a tennis sized ball

6.       TetraPak cartons which can be recycled