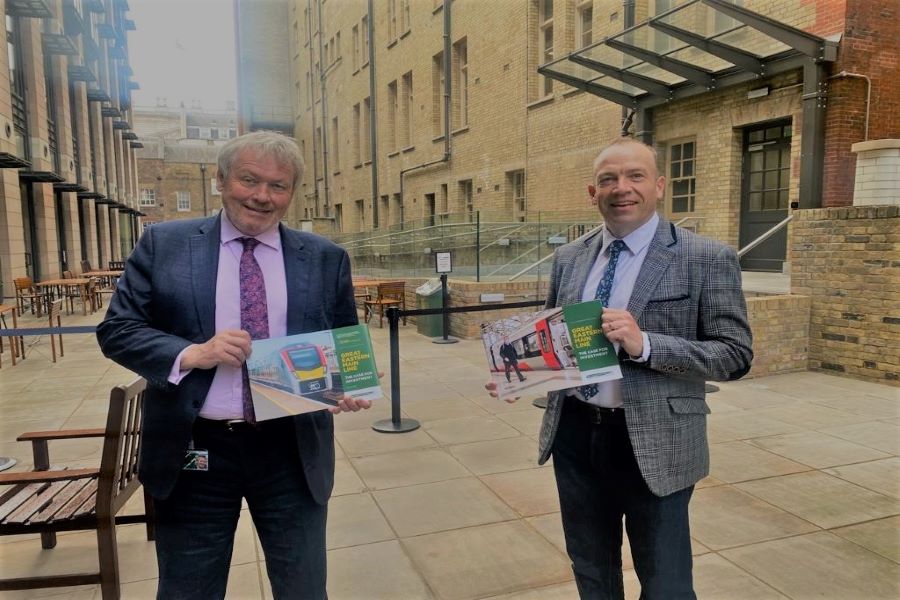 MPs, business leaders and politicians from Norfolk, Suffolk and Essex have repeated a call to Government for investment in a faster, more reliable rail service on the Great Eastern Main Line
Never Miss A Copy
Sign up now to receive for free the latest magazine as an e-publication
SIGN UP

The investment is needed to ensure the region can realise the full customer and economic benefits of its new trains.

A new Case for Investment in the Great Eastern Main Line (GEML), which runs from London Liverpool Street through Essex and Suffolk to Norwich, has been officially presented to Government.

Giles Watling MP, Chair of the Great Eastern Main Line Taskforce, met Chris Heaton-Harris MP, Minister of State for Transport, to deliver a copy of the new Case for Investment.

It calls for a range of key rail improvements including:

The improvements could generate up to £9.3bn in economic benefits, kick start tens of thousands of jobs along the route and create more than 4,000 construction jobs while the improvements are made.

Giles Watling MP, Chair of the Taskforce, said: “We’re delighted to be able to officially hand this Case for Investment to Government. It is a call to arms not just from the Taskforce partners, but from businesses, education establishments and passengers across the region who demand a faster, more reliable service.

“It will drive sustainable economic regeneration and deliver long-term, clean, economic growth across Essex, Suffolk and Norfolk and enable our region to contribute more to UK plc. It will also allow for improved freight services from the Ports of Felixstowe and Harwich, which will be brought together to form a new Freeport.

“Forecasts for population and passenger demand clearly show the region is set for significant growth over the next decade, which will inevitably lead to more people using train services across our region.

“But the economy along the GEML is not performing as well as other areas within a similar distance to London. It is also not growing as fast as other areas and is continuing to fall further behind over time. These investments will play a key role in levelling up the infrastructure in our region and ensuring we can compete with other parts of the UK.

“Delivering an efficient and reliable train service will contribute to our push for Net Zero, helping to decarbonise our economy by encouraging more sustainable travel and freight movement, in addition to the recent introduction of the new £1.4bn environmentally-friendly train fleet.”

The Great Eastern Main Line Taskforce was established in 2013 and brings together the region’s MPs, local authorities, Local Enterprise Partnerships, Chambers of Commerce and local businesses, with support from Greater Anglia and Network Rail. Since then, a number of improvements have been made, including the new £1.4bn Greater Anglia train fleet, which is now being rolled out across the network.

Those trains are already helping to deliver performance improvements, but investment in the rail infrastructure is needed to consolidate those gains, achieve further increases in service reliability and resilience, and enable faster services and reduced journey times.

The Case for Investment in numbers:

Image: Giles Watling MP, Chair of the Great Eastern Main Line Taskforce, delivering a copy of the new Case for Investment to Chris Heaton-Harris MP, Minister of State for Transport