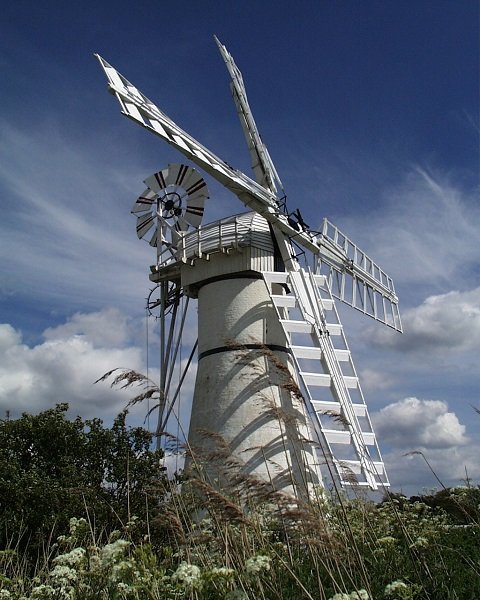 Dedicated to preserving the legacy of wind power.

Having been born in London and with a career at International banks in the City, rural Norfolk couldn’t have been further from Debra Nicholson’s mind.
“If somebody had said to me 25 years ago that I would be here in Norfolk looking after Thurne Windpump and the only collection of historical windpumps housed at the Wind Energy Museum, I would have said they were crazy.

Living in Essex and tired of the grind, as a family we decided to move to Norfolk in 1997/8. A life in retirement appealed, although I needed something to keep me busy, so I took an A level in photography; little knowing where that would lead us!

Having always loved Thurne Mill on the Norfolk Broads, I chose it as my A level project and that is how I met Bob Morse who had saved Thurne Mill from dereliction in 1949.

I approached Bob to ask if he could help me with the history of the mill, and his enthusiasm for the project was astounding. He became a close family friend and I began to help him with the collection, which at this time was private and only opened by appointment.

In 2001, Bob asked if I would look after the collection once he had gone. This was a difficult decision, as I had no engineering experience and although practical, I was not sure I was capable. However, in 2003 after many discussions, I took on the collection during Bob’s lifetime. Sadly, we lost him in January 2007, but we’d had four years to ask Bob when things went wrong or repairs were necessary, and he enjoyed the satisfaction of knowing that his collection was in safe hands.

In his will he left me Thurne Mill. This was overwhelming in several ways; the most prevalent being the custodian of one of Norfolk’s most iconic windpumps.

Now things were very different. No Bob meant no depth of knowledge, and I was aware that I would now have to teach these amazing structures how to pay for themselves. For several years under the name of Morse’s Wind Engine Park, we opened to the public and held special events. But still the balance was not right, and I needed to have a rethink.

The collection demonstrates the history of wind power and the educational progression of how wind has been harnessed and used over the past 200 years. With unique exhibits it demonstrates working examples of Norfolk’s drainage history. Due to this we felt a name change was a way to put the collection on the map. This is when the Wind Energy Museum was created. We hoped that now we would attract the attention of the numerous energy companies involved in the development of wind power offshore.

The name change inspired me to apply to the Lloyds Bank School for Social Entrepreneurs and I was fortunate enough to get on the course. We now have a Board of Non-Executive Directors and I continue in the role of Managing Director with a team of volunteers behind me.

The journey is continuing, and I still have lots to achieve before I can say that the collection and Thurne are sustainable, but this is a challenge that I absolutely intend to fulfil!”

Scroll back to top