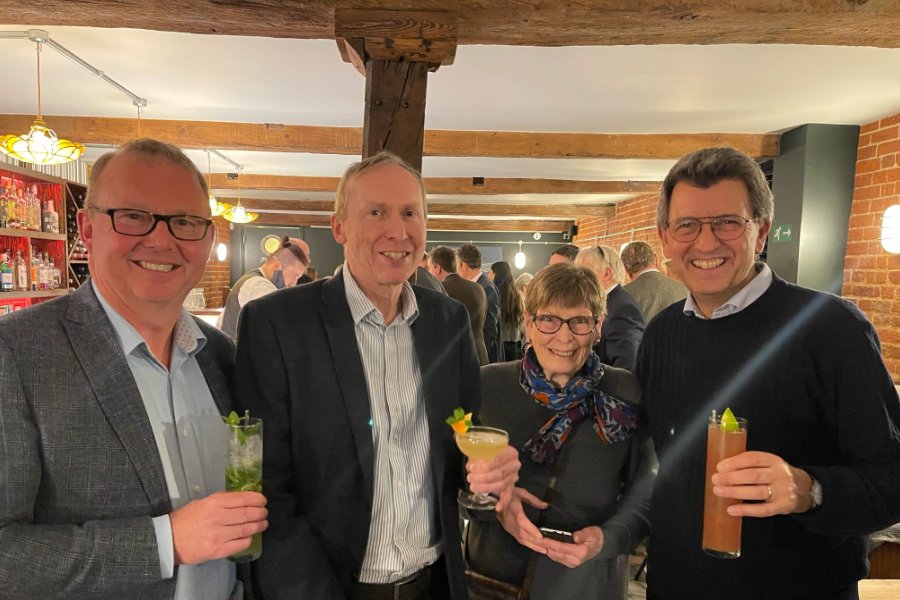 Past, present, and future is the theme of architects’ 25th celebration

A 25th anniversary celebration for a renowned architects practice was attended by two very special guests who helped to tell the story behind the brand.
Never Miss A Copy
Sign up now to receive for free the latest magazine as an e-publication
SIGN UP

The oldest and youngest attendees of the party, arranged to mark a quarter of a century for NJ Architects, Ipswich, “epitomised the past and present position” of the multi-award-winning firm, according to Partner Nicholas Jacob.

He said: “The littlest guest was my grandson Jude, son of our architect Pippa Jacobs and possibly a budding architect of the future.

“But we were also joined by Maggie Andrews who was with the firm from the day it was founded.

“She provides that very tangible link to our past – our foundations, while Jude provides the excitement and expectation that comes with all new life – our future.

“We are incredibly proud of the practice we have created, our achievements of the last 25 years and the prospects we have to continue to build on that success.”

Back in the 1980s, long before NJ Architects was even the seed of an idea, Maggie was Office Manager for a man named Peter Cleverly, an English architect whose great-grandfather, Charles St George Cleverly, was responsible for the original layout of Hong Kong.

Like his ancestor, Peter Cleverly wanted to make an impact in the sector but although he originally set his sights on transformation in London, he became appalled with the onslaught of high-rise developments going up in the city and, in the 1960s, he left to start his own practice in Suffolk.

This practice later became Cleverly and Jacob which he set up with Nicholas Jacob, was where the seeds of NJ Architects began.

Shaun Soanes, a Partner at NJ Architects, said: “The pair specialised in conserving churches and ancient houses, and collaborated with the National Trust.

“At one point 85 medieval churches were in their care, Peter Cleverly later went on to write two books relating to his time as an architect and the firm had become instrumental in campaigning for the sensitive conversion of traditional East Anglian barns into houses.

“NJ Architects continues to do this even today – we have a desire to preserve, protect, renovate and restore.”

Cleverly and Jacob later merged with Purcell Miller Tritton where Nick was a senior partner, Hugh Bunbury an associate and Shaun Soanes a technologist – and this trio remained at the helm of NJ Architects when it was subsequently formed in 1996.

Maggie then worked for NJ Architects as office manager until her retirement 17 years ago.

She said: “I was absolutely thrilled to be invited to the celebration of 25 years. It’s quite something to have been with a company from the start and watched it grow into such an incredible and successful business.”

Media Info
PrevPreviousNew partner for East Anglian law firm
NextPeople with passion: have you those with the magic asset?Next