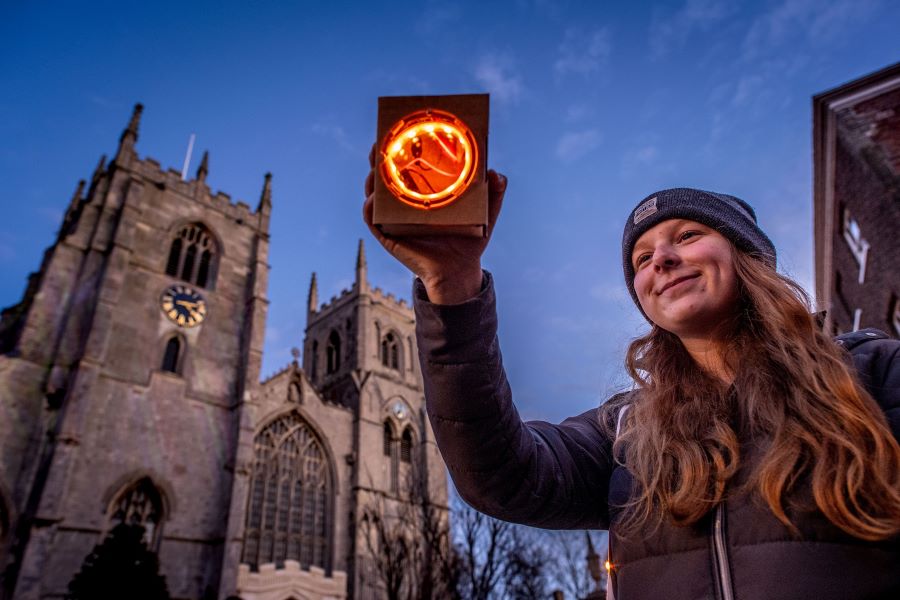 A series of art projections will light up King’s Lynn and showcase it as a national centre for cultural and creative innovation.
Never Miss A Copy
Sign up now to receive for free the latest magazine as an e-publication
SIGN UP

Landmark buildings and outdoor venues and spaces will be illuminated by GAME ON, which aims to deliver significant economic benefits to the area, including business growth, skills development, and tourism.

New Anglia Local Enterprise Partnership has contributed £65,000 from its Innovative Projects Fund towards the project which hopes to drive up tourism at off-peak times – an objective of the region’s Local Industrial Strategy.

GAME ON will be delivered by the Borough Council of King’s Lynn & West Norfolk in partnership with Collusion, a not-for-profit cultural organisation with which it has been working for the past three years. Each project will have an 8-16-month production period, culminating in two weeks of delivery.

Three interactive artworks focusing on climate change will be staged between September 2020 and April 2022 and all of them will be devised in King’s Lynn with creative organisations. The five main sites for the projections will be The Custom House, Greyfriars Tower and Park, St Nicholas’ Chapel, The Minster and Tuesday Market Place.

It is hoped the events will be attended by 6,500 people and generate 24,000 online engagements. An estimated 37 local creative businesses will be involved in producing the shows.

Chris Starkie, chief executive of New Anglia LEP, said: “King’s Lynn is a priority place in the Economic Strategy for Norfolk and Suffolk and this initiative will raise its profile and attract visitors at a time when we are working to recover our tourism sector.

“It will also help to strengthen the local creative economy, providing more jobs and a greater breadth of employment opportunities, delivering against the objectives in our Cultural Strategy.”

Cllr Elizabeth Nockolds, Deputy Leader at the Borough Council of King’s Lynn & West Norfolk and Cabinet Member for Culture, Heritage and Health, said she was delighted that the funding had been secured.

Arts events were a “vital way of encouraging visitors” to King’s Lynn, particularly in the winter evenings when things were quiet for the hospitality trade,” she said. These interactive artworks would encourage safe mass participation at the sites by being available over a period of time and online during and after the event.

Cllr Nockolds said: “The Game On project builds on the previous success of our projections. Our aim is to establish King’s Lynn as a centre of excellence for collaborative, creative, digital installations that add to the cultural offer in the town. By encouraging and developing local, creative, digital talent, we are enhancing skills and creating career ambition.

“We are particularly pleased that the theme chosen for this project is climate change, and the final project is about developing a climate change manifesto for the town. I am really looking forward to meeting the artists and creators involved and seeing how this project develops over the next few months. The first installation is scheduled for February 2021.”

Over a weekend in September 2017, Collusion showcased four experimental, interactive projections in King’s Lynn created by teams of local creatives over a period of four months.

Around 600 people took part in the events and the success of the project resulted in REVEAL. This used the unique geography, history, and architecture of King’s Lynn as the setting and stage for a play about a Syrian refugee making her way through Norfolk.

King’s Lynn served as the backdrop for dynamic projections and as the site for an augmented reality treasure hunt, made possible using a unique browser-based smartphone technology. It launched on 23 November 2018 and ran until 4 January 2019.

“The town’s network of large-scale outdoor projectors provides a unique opportunity for it to lead the way nationally in the development of site-specific, exemplar work that is both high quality and engages the public in amazing, immersive and interactive experiences.”