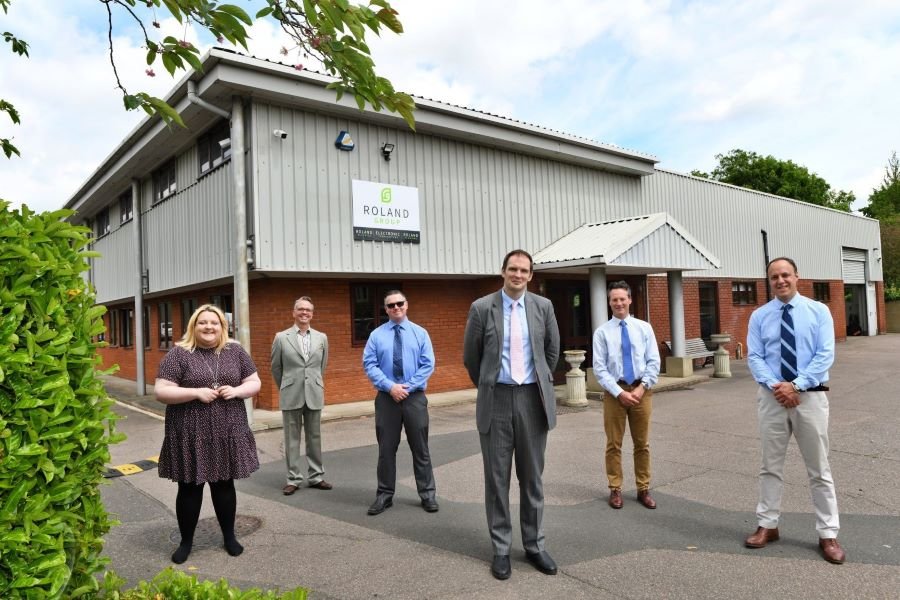 Manufacturing firm Roland Group has played host to MP Dr Dan Poulter, who applauded the company’s role in creating new employment for Suffolk young people
Never Miss A Copy
Sign up now to receive for free the latest magazine as an e-publication
SIGN UP

The Wickham Market based company was visited by the Member of Parliament for Central Suffolk and North Ipswich, alongside representatives of Suffolk Chamber of Commerce, as part of a celebratory tour to acknowledge the government’s ‘Kickstart Scheme’.

Roland Group, which employs 30 staff and has remained operational throughout the pandemic, recruited 19-year old Lauren Clarke as a machine operator and assembler earlier this year.

Her placement has been made possible by Roland Group working closely with Suffolk Chamber of Commerce, which has been processing company applications and requirements across the county.

In recent weeks, Lauren’s role has been made permanent, and she will continue to play a key role in the manufacturing team, while gaining further skills.

The scheme was announced by the Department of Work & Pensions last year and seeks to offer active employment to those aged 16-24 who are out of work and are keen to gain skills, experience and a wage.

Member of Parliament for Central Suffolk and North Ipswich, Dr Dan Poulter said: “I’m delighted to have been able to visit Roland Group and to learn that Lauren has secured a role with local firm, Roland Plastics, through the Government’s Kickstart scheme and supported by Suffolk Chamber of Commerce.

“It is vital to ensure that our young people have the training and life skills to support them in securing their future role and I’m delighted that Roland Plastics have already confirmed two placements through the scheme.”

Barrie Hayter, Head of Sales & Marketing, said: “We are really pleased to welcome Lauren to Roland as part of this scheme.”

“The team at Suffolk Chamber has been extremely helpful and stepped up very quickly when the government announced the scheme to support smaller businesses.”

Ben Emerson, Director at Roland Plastics, is pleased with the role the firm is able to play in supporting someone like Lauren.

He said “We have been able to employ a local applicant who does not drive and was struggling to find work in our rural area. They will be earning a wage and receiving training to support them find future roles.”

Paul Simon, head of policy and communications at Suffolk Chamber of Commerce, said: ”Being part of the Suffolk Gateway Partnership, we’ve really appreciated the opportunity to work with Roland Group, a great Suffolk success story, in helping them apply for a Kickstart placement and so ensure that a local young person is able to benefit from six months of quality work experience. To date, we have helped secure nearly 600 such positions – with many more still to come!”

Roland’s second placement will be confirmed in the coming weeks.

As well as carrying out a daily workplace role, each participant receives a peer buddy, alongside training and coaching in areas like interview skills and job hunting.

For decades, Roland Group has been supplying bespoke injection moulded plastics to small and large organisations. The company started life as Girdlestone Pumps in the 1960’s.