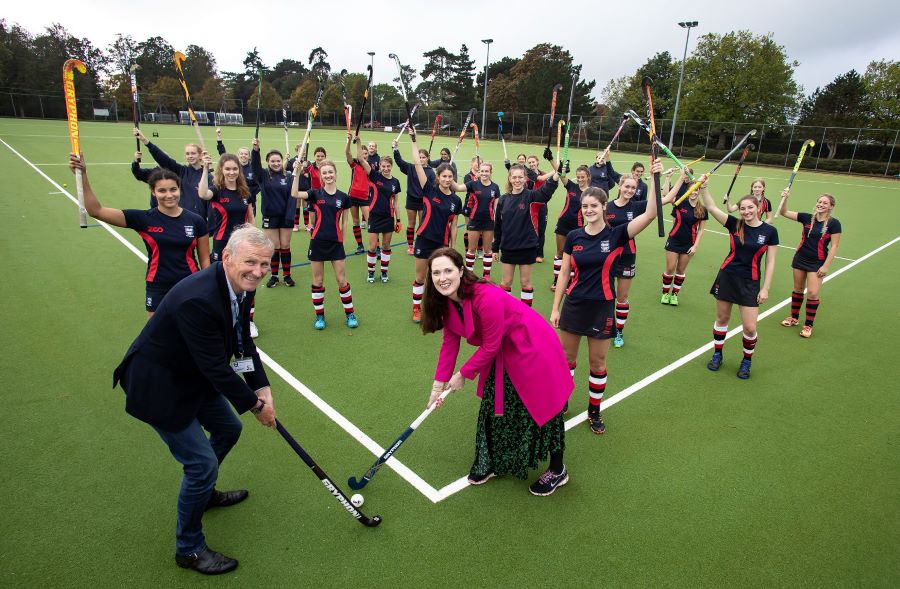 Woodbridge School has launched its new state-of-the-art, all-weather Astro Pitch. The School celebrated with a ceremony attended by Shona Norman, Head of Woodbridge School, Clive Schlee, Chair of Governors, and the School’s Head of Hockey, Mariette Rix, South African field hockey player and double Olympian in 2008 and 2012.
Never Miss A Copy
Sign up now to receive for free the latest magazine as an e-publication
SIGN UP

Senior pupils took to the new Astro for the very first time and were joined by Miss Norman, who opened the pitch officially by passing the first ball!

“I am delighted that our students will be able to benefit from such a high-quality facility earlier than had been scheduled. Our School is central to Woodbridge and to the surrounding area. We consider it essential to provide first-class sporting facilities and opportunities for our pupils and the local community, too.”

The School appointed McArdle Sport Tec – leading specialists in synthetic turf technology – to refurbish its existing facility. They have replaced the previous sand-filled surface with a more advanced sand-dressed TigerTurf system, for enhanced performance and durability, and have covered all aspects of refurbishment, including drainage, Macadam base, shock pad, artificial turf installation, fencing, as well as improved LED floodlighting.

This superb all-weather outdoor facility will be used by the Senior School’s highly-skilled hockey teams – which include 15 County players and two England Hockey Performance Centre players – as well as by Woodbridge School Prep for some of its hockey games lessons. It will also provide a valuable facility for other sports and activities, such as PE, cricket and football.

“Anticipation built over the last few days, as pupils could see the work quickly reaching an end; excitement grew to get to use the new surface for the first time…and it lived up to what we hoped it would be!

“It was a special moment for senior pupils to be the first out on the pitch and to enjoy playing so much. Smiles, speed, skills and lots of tricks were to be seen everywhere. We are lucky with the young people we get to work with every day and yesterday they showed me again why we are so proud of them all.”

The pitch will also be available for private hire, and Woodbridge School will be looking for new ways in which it can be used to support the local community.