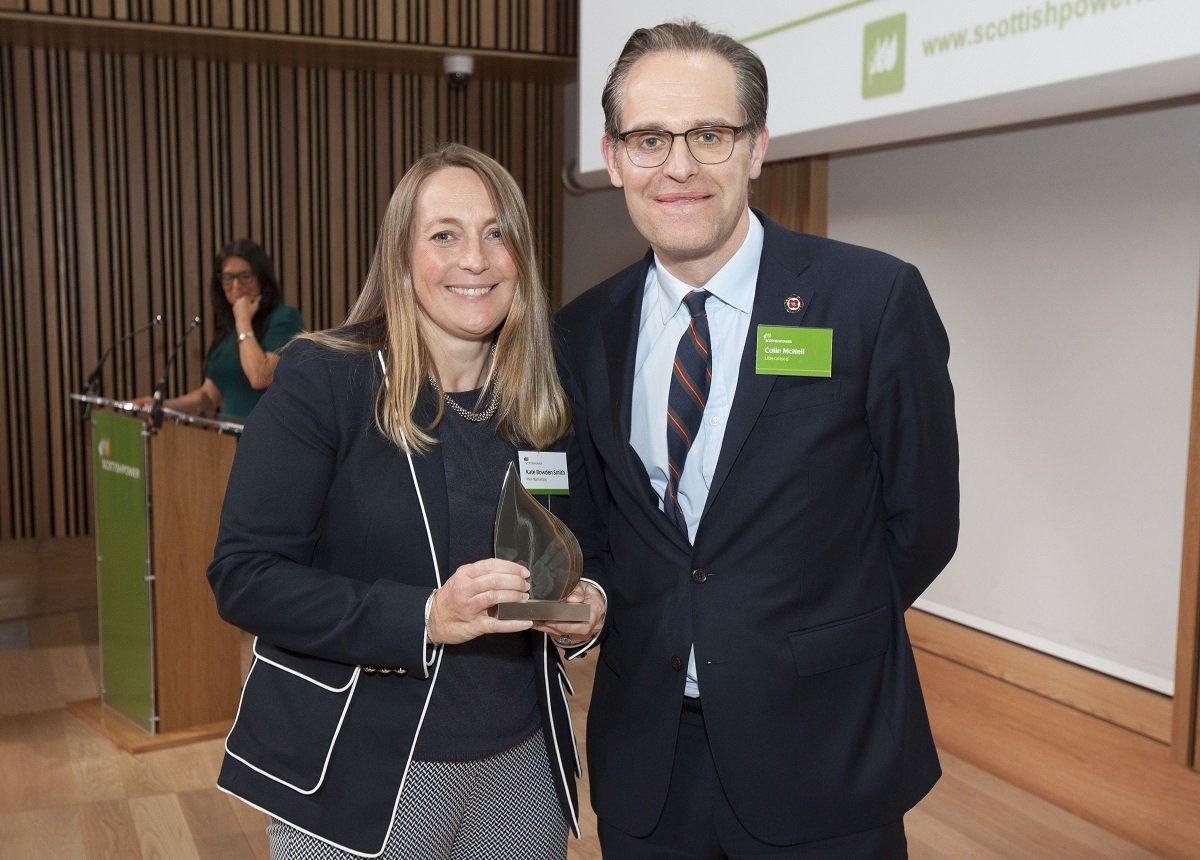 ScottishPower has recognised Pier PR & Marketing as one of the company’s leading SME suppliers at a special event in the energy company’s new HQ in Glasgow.

Pier is a strategic communications agency based in Felixstowe, working with a range of clients in the renewable energy, business-to-business, consumer, food and drink, marine and not-for-profit sectors. They have been supporting ScottishPower Renewables’ work on the East Anglia ONE offshore windfarm for over two years.

At the awards evening, ScottishPower revealed that it has placed around £5 billion worth of contracts in the last two years as part of its largest ever investment phase, supporting more than 80,000 jobs across the company’s supply chain. In total, contracts have been placed with more than 3,500 suppliers.

Kate Bowden Smith, MD at Pier, said: “We’re delighted to have been recognised at these prestigious awards. ScottishPower Renewables are investing significantly in the East Anglia region and we’re proud to be part of the supply chain helping to deliver clean green energy to the UK.”

Keith Anderson, ScottishPower’s Chief Corporate Officer, said: “To deliver some of our most ambitious projects ever, we are working with a wide range of specialist companies, and supporting tens of thousands of jobs. Pier has provided invaluable support to our East Anglia ONE project, displaying a wealth of creativity and hard work to help keep communities and stakeholders informed about our single largest investment scheme currently underway in the UK. We are delighted to recognise Pier for all of their excellent work.

“It has been a year of uncertainty politically in the UK, with choppy waters still to be navigated in the years ahead. However, if the Government continues to provide stable regulation and presses ahead with the ambitious clean energy and industrial strategy policies, then companies like ScottishPower will continue to invest billions of pounds and support quality jobs.”

ScottishPower gave out 16 special recognition awards in total to the companies and workers who have been helping to deliver the variety of upgrades and improvements across the UK.

Major projects currently being delivered by ScottishPower include the 714 megawatt (MW) East Anglia ONE offshore windfarm off the Suffolk coast. Onshore construction work is well underway, with offshore works anticipated to start in 2018.

In September ScottishPower Renewables officially opened the 239 MW Kilgallioch Windfarm in south west of Scotland, signalling the completion of a £650 million investment scheme to build 8 new onshore windfarms in Scotland, which can power around 280,000 homes.

Approximately £660 million is being spent this year alone to strengthen the network of cables, power lines and substations that keep the lights on for 3.5 million homes and businesses in Scotland, Merseyside and North Wales. ScottishPower has also now installed over 600,000 smart meters.