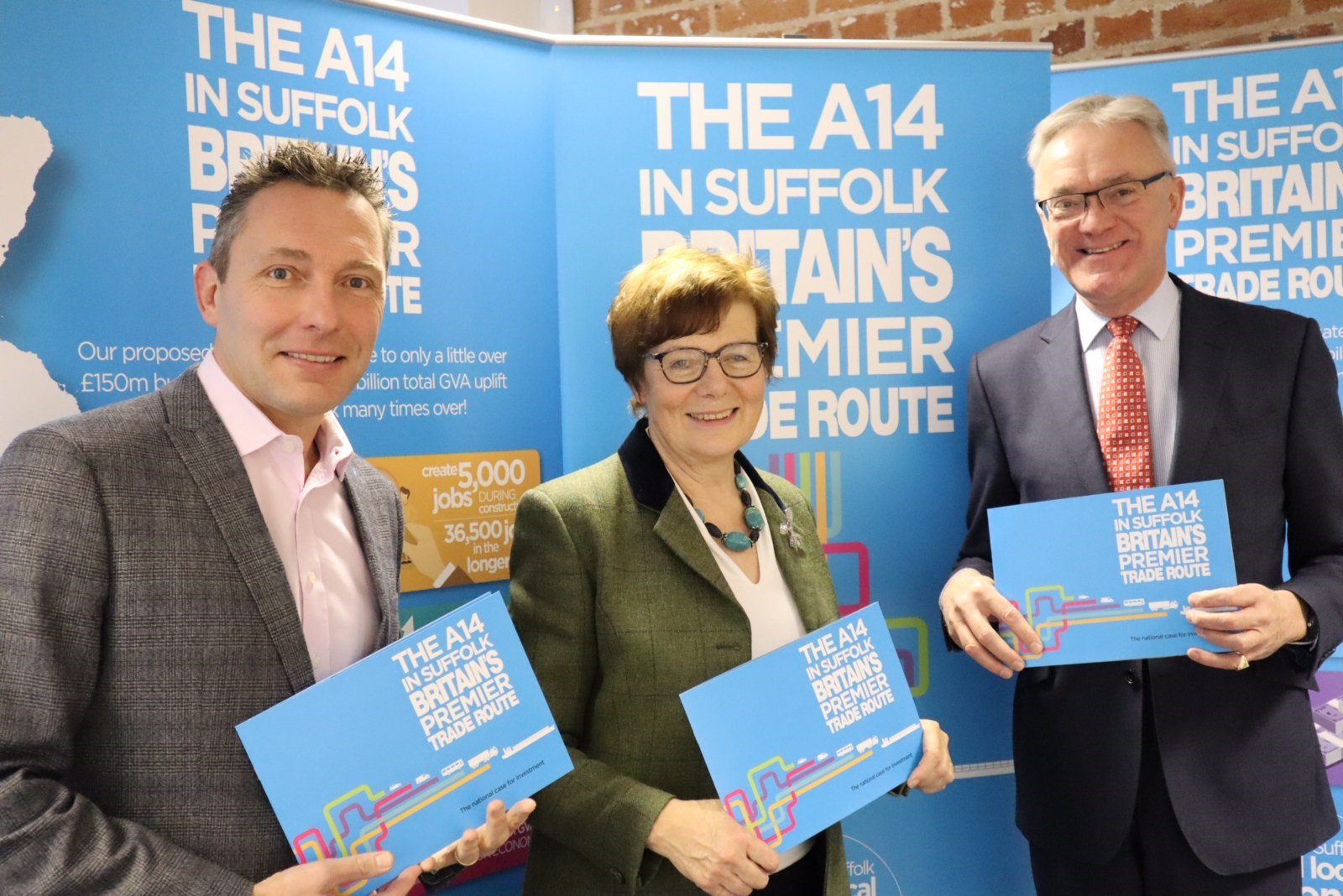 Next big push for Suffolk’s A14 campaign

New research and House of Commons reception: next big push for Suffolk’s A14 campaign

Campaigners looking to secure government investment at seven pinch points along the A14 in Suffolk are travelling down to London this week (23 January) to make the next big push for the £150m investment that will unlock significant economic growth, jobs and housing.

Over the last two years, the Suffolk Chamber of Commerce-led No More A14 Delays in Suffolk has been building the business case – and wider public support – for what is seen by most commentators as ‘Britain’s Premier Trade Route’ because of the amount of goods running along it to and from the Port of Felixstowe.

The campaign received a major boost last year when Highways England, the government-owned company with responsibility for the operation, maintenance and improvement of the motorways and trunk roads, designated the highway as a ‘current, planned and potential expressway’.

Expressways are motorway-grade two-lane highways and their designation requires that all junctions off and onto them are enhanced.

Since then the campaign has contributed compelling evidence to the Department for Transport’s (DfT) consultation into the Highways England report to ensure that the A14 – and other Suffolk projects – are included in the final Roads Investment Strategy (RIS) 2.

The DfT is due to make a final decision as to which projects will be funded under RIS2 later this year and the House of Commons reception, hosted by South Suffolk MP James Cartlidge and Mark Pendlington, chair of the A14 Strategy Board will allow the campaign to make its case in front of key decision-makers and influencers.

The Secretary of State for Transport, Rt. Hon. Chris Grayling MP, has been invited to attend alongside local MPs and business leaders, plus representatives from the Northern Powerhouse and Midlands Engine, two key economic regions dependent on the A14 in Suffolk for the efficient low of goods.

Mark Pendlington, chair of the A14 strategy board said: “The A14 in Suffolk is a vital part of Britain’s Premier Trade route, but is clearly not fit for the needs of our fast-growing economy.

“We have known from the outset that a comparatively modest investment would deliver significant benefits for the national economy, and give Suffolk and the east of England the boost it needs to compete and win in the post Brexit international marketplace. This latest research nails our case once and for all, and next week we will be taking the evidence to the heart of Westminster to ask Ministers and MPs for their support.

“Our message is loud and clear: we want to release the full potential for growth in the economy, jobs and housing; and end the transport delays that day-by-day threaten the future of our modern, mobile and international economy.”

Recent research by Hatch Regeneris, who were commissioned by Suffolk County Council, suggests that improvements to the seven pinch points would cost £150m in total and would result in:

Here is a link to a video of Mark Pendlington talking about the A14 campaign: https://m.youtube.com/watch?v=ff7EBeQ7UNk