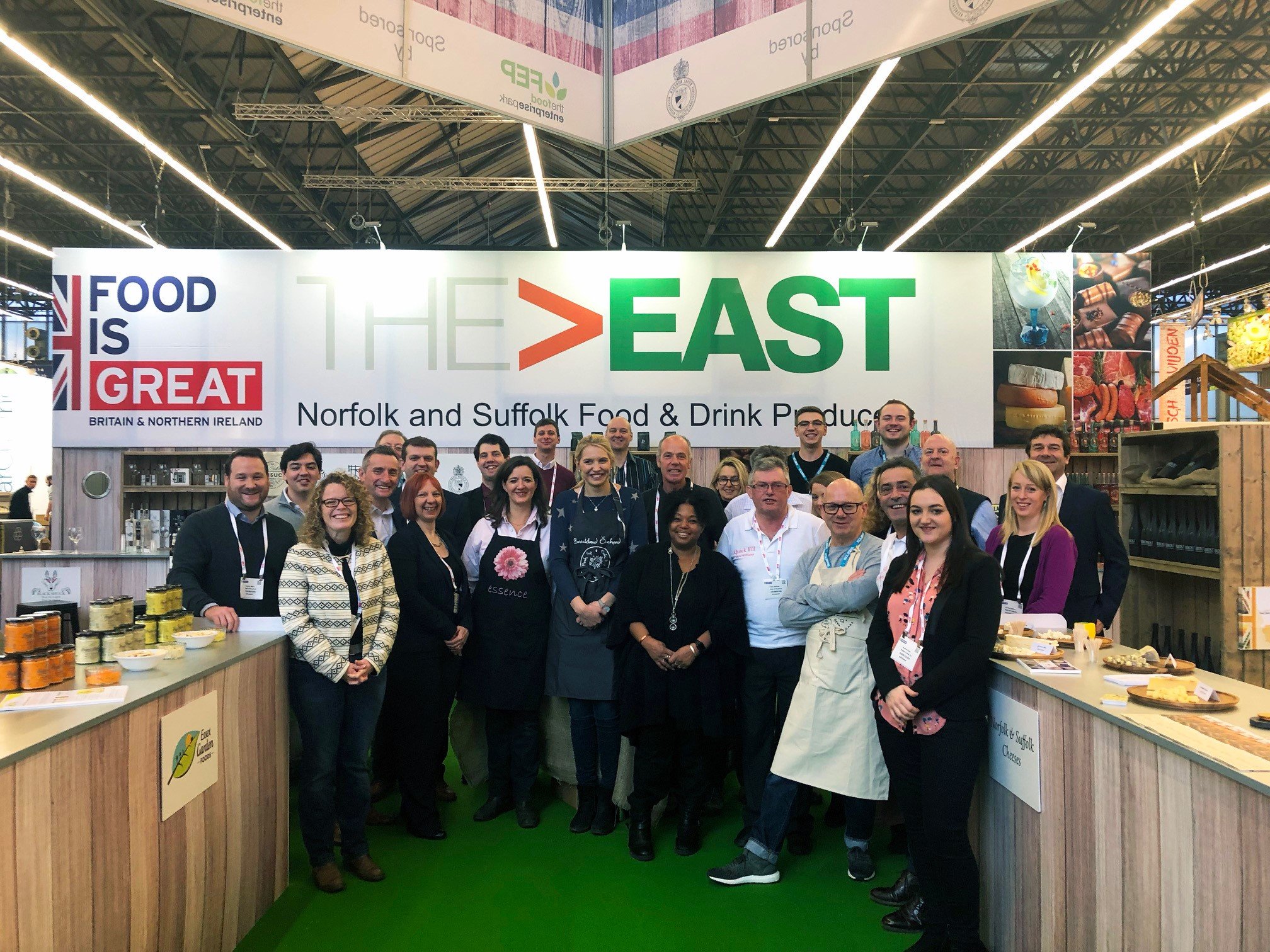 Norfolk and Suffolk food and drink producers are harvesting great leads following a trade mission led by the East’s investment team to the Netherlands. A total of 18 producers have gained substantial interest and business leads while attending Horecava – one of Europe’s largest hospitality trade shows which is held every January in Amsterdam, the Netherlands.

This is the result of working closely with representatives of Norfolk County Council, Suffolk County Council, Department for International trade (DIT), New Anglia Local Enterprise Partnership and the Lively Crew on exporting, investment and business support. Over the past year, Norfolk and Suffolk’s economic development and inward investment officers have brokered links with key Dutch partner organisations and has organised trade visits to the region.

Jason Salter, Operations Director from Freshpac (Due Fratelli) in Halesworth, said: “The Horecava event has enabled us to show case our products alongside some of the region’s best producers to markets which otherwise would have been more difficult to enter into. Everyone involved during the exhibition showed a high level of enthusiasm and pulled together to show that this region has a lot to offer. Despite the current political and economic uncertainty in the UK at the moment, the Department for International Trade and New Anglia has fully supported everyone involved and we are now making some exciting new contacts in Europe. A very exciting show to be part of.”

Dominic Whyte, Sales and Marketing at Yare Valley Oils in Surlingham, commented: “We were delighted with the business support provided by the LEP and the DIT in targeting new potential leads and people of importance during the show itself that we wouldn’t have otherwise known about. The opportunity for us, as a small producer, to exhibit our products to a foreign market was invaluable and something we just wouldn’t have done without the support from the various organisations and departments including the LEP and DIT.”

Sarah and Edward Savage from Essence, Montys and Beetella based in Reepham, said: “A thoroughly fascinating and enjoyable exhibition where not only ourselves but equally expansive and like-minded companies were able to research and obtain greater understand of trading platforms in conjunction with the DIT and Norfolk County Council, both helping Norfolk flourish.”

Dave Steward, Founder at Nonsuch Shurbs in Rendlesham, said: “We have secured a listing with a premium retail chain in Amsterdam and are now talking to three potential distributors for the Netherlands – Thanks Horecava!”

Patrick and Sarah Saunders from Black Shuck Ltd in Fakenham, said: “Horecava was extremely successful for Black Shuck. Through the support of the East of England Team we were able to establish a number of promising leads and we look forward to follow up visits to the Netherlands in the coming weeks and months.”

Our food and drink sector is a significant contributor to the UK economy with trade in food, drink and agriculture worth £3.9 billion. With only 2% of the UK’s population, it produces 11% of its food and drink. It is the UK’s most productive and profitable farming area, with a substantial and valuable supply chain.

Doug Field, Chair of New Anglia Local Enterprise Partnership, said: “Together with the councils and DIT we identified the Netherlands as a trade partner with major growth potential. It’s incredibly encouraging that the Dutch hospitality sector, wholesalers and supermarkets are taking such a keen interest in our products with the intention to import them.

“Norfolk and Suffolk is well placed as Europe’s eastern gateway to the UK. It is a food lover’s paradise with a strong agricultural heritage and a long history of innovation, much of it intertwined with Dutch know-how. We’re looking forward to building on this success and helping our food and drink sector expand internationally.”

Thinley Topden, Acting Head of the Department for International Trade East of England, said: “Trade shows can often be a good way to find customers, analyse the competition and assess demand for your products and services.  This is a great example of the Department for International Trade, New Anglia LEP and the two county councils combining resources and working together to support local food and drink companies to do just that by attending an important trade show in the Netherlands.  We are continuing to work with the companies that attended Horecava and with over 30 International Trade Advisers in the East of England, we can offer personalised support for other companies looking to export their goods and services. So don’t hesitate to get in touch.”

Cllr Barry Stone, Chairman of Norfolk County Council’s Business & Property Committee, said: “We are very pleased with the successful trade mission to the Netherlands to attend Horecava 2019. For a number of our Norfolk companies, it was their first time attending an international trade show. It is great news to hear all of the companies participating gained useful leads to follow up and a number of them have already been signed with Dutch distributors. We certainly look forward to growing our future trading relationships with the Netherlands.”

Cllr Matthew Hicks, Leader of Suffolk County Council and Cabinet Member for Economic Development and Infrastructure, said: “We are really pleased with the success of the Horecava exhibition. The eighteen Norfolk and Suffolk businesses that attended spoke to quality contacts from distributors to businesses that wanted to trade. I am delighted that Suffolk County Council was able to support this initiative.

Read more about Norfolk and Suffolk’s food, drink and agriculture sector in the latest brochure. The area also has a successful and groundbreaking agri-tech sector with leading global innovations in hi-tech data, drone technology and robotics in food production and growing techniques. For example, Norwich Research Park is home to world-leading research institutes specialising in food and bioscience.

As part of strengthening trade relations with the Netherlands, officials from Norfolk and Suffolk signed a partnership agreement (MoU) with Dutch province Drenthe in September last year. The joint-working with Drenthe focuses on inward investment, export and collaboration on research and development (R&D).

In addition to that a collaboration between East Anglia and the Netherlands was formalised focusing on gas exploration, offshore windfarms and decommissioning of old platforms in the Southern North Sea. Shortage of skills and resources has led to cross-border activity for both British and Dutch companies to collaborate and exploit these opportunities for mutual benefit. The Memorandum of Understanding is between the East of England Energy Group (EEEGR), Amsterdam Ymuiden Ports AYOP, North Sea Energy Gateway, Den Helder NSEG and Team Humber Marine Alliance.